Why Startups Fail at Communication (“Let me close the door”)

The newest computer can merely compound, at speed, the oldest problem in the relations between human beings, and in the end the communicator will be confronted with the old problem, of what to say and how to say it. 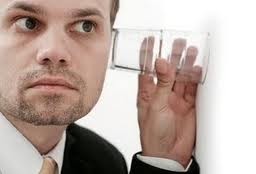 On the face of it, you’d think startups and small businesses would be bastions of open, healthy communication, full of people who have sworn off the secret obsessions and toxic climates of the big corporations they left behind.

It should be easy to have direct, no-nonsense conversations in an early-stage venture. Right? No bureaucratic red tape to stifle candid dialogue or common-sense problem solving.

The reality is not so simple.

Case in point: An early-stage startup I advised a few years ago — a venture with only fifteen employees — where the firm’s COO listened to my private conference room interviews through the wall of his adjacent office by putting his ear to a cup against the wall (you can’t make this stuff up).

More  bizarrely, he left his office door ajar while eavesdropping, just enough so he could be seen from the hallway. He could have used the old toy spy scope and been more subtle, which implies that his real intention was not to listen in, but to send a “watch out” signal to his team to be careful what they might say to me.

Granted, that’s an extreme example and, as you might guess, the COO in question wasn’t around very long to continue such behavior.  And while most new ventures don’t suffer from intimidating COOs, a surprisingly high percentage feature other forms of poor communication.

In the same small firm described above, I dropped in on a sales rep one afternoon and asked how things were going for him. He began to reply, but interrupted himself, saying “hang on . . . let me close the door.” Then he launched into a long list of concerns — how the head of technology doesn’t know what he’s doing, the sales meetings are a waste of time, and the sales tracking platform isn’t being used by any of the salespeople. His opinions were shared by many others on the team, but no one discussed them openly.

This kind of communication gap is just as common among startup and small businesses as in large, publicly-traded bureaucracies.  The reason is simple. Healthy communication is, first and foremost, a personal phenomenon. It requires qualities like candor, curiosity, and courage — and a willingness to invite scrutiny and feedback without regard to whether it will be viewed as “good news” or “bad news.”

Entrepreneurs fall across a wide spectrum when it comes to these qualities, and each of us has good and bad days when it comes to communicating effectively. We each bring a lifetime of conditioning, maybe from a household where conflict was swept under the rug, or from a driving corporate culture where truth-telling was rare and dangerous.

A wave of innovative communication technology and social networking platforms complicates things even further and creates a dangerous illusion — that we can somehow automate the interpersonal behaviors that lead to clarity, openness, and trust.

But healthy relationships and the trust they spawn cannot be digitized.

Instead, I regularly see the opposite effect among startup teams, who employ cutting-edge communication technologies to generate data, data, and still more data, but have little time or skill to cut through the smoke and talk honestly about the issues that matter most. Clearing the smoke requires old-fashion technologies such as good critical thinking and skillful conversation.

That’s why the smallest of founding teams can fall into dysfunctional patterns of communication that look a lot like the old, withered organizations they swore they would never become. And the stakes are high: From a startup’s earliest days, each conversation (or non-conversation) sets a tone, sends a signal, and lays a track for the future culture of the business. Over time, this culture becomes a force beyond easy control. Howard Schultz, founder and CEO of Starbucks, said it well in his book, Pour Your Heart Into It:

It’s difficult, if not impossible, to reinvent a company’s culture. If you have made the mistake of doing business one way for five years, you can’t suddenly impose a layer of different values upon it. By then, the water’s already in the well, and you have to drink it.  (p. 80)

If you want a culture of clarity, candor, and interpersonal trust — understand that these attributes must be earned over time.  They don’t simply come with the entrepreneurial territory. I often work with venture clients to help them take an honest look at what we call Integrity of Communication, and I have devoted a full chapter in my book on the topic.

The great news is that management teams that harness these qualities and build them into the fabric of their growing business can create a tremendous, and sustainable, competitive advantage.