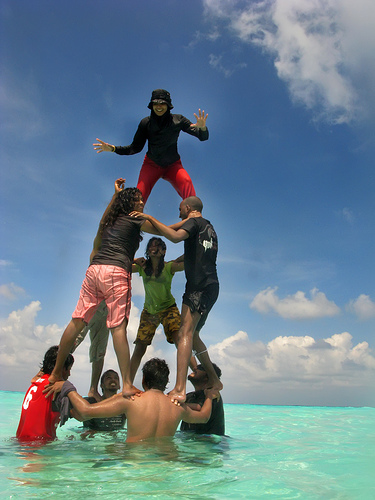 If you want to launch a business from scratch, it’s hard to find a better entrepreneurial role model than J.C. Faulkner.  J.C. is one of the four core founders whose startup stories I follow throughout my book, and is a long-time client and friend.  In developing D1 Mortgage into a business valued at $100 million over roughly three years, J.C. built a strong culture of trust, accountability, and high performance — starting with his talented, cohesive management team.

I was cleaning out some files this past weekend and re-read the text from a conversation between J.C. and me in 2001.  Although his startup journey occurred before smart phones and Web 2.0, I believe the lessons are enduring and valuable for any management team.

I hope you find this brief segment useful:

JB: How did you cultivate trust as a business tool?  Did it come with the team that you recruited, or did you work on it?  If so, how did you build it?

JCF:  First of all, trust is not something that you can buy or something that happens quickly.  It is an intense thing that has to be developed.  It is no different than the trust somebody has with his or her spouse or closest friend.  It just takes time.  Trust has its own accountability.  When someone over time performs or does things that you expect or hits those expectations, then the trust has a chance to grow.  What may be unfair about trust is that when somebody does something that violates trust, that one act seems to eat up a lot more than a single positive act will build.  This is just the nature of it.  We decided we were going to invest a lot of time in each other.  I brought together five people I had never worked with because I wanted to work with people who were the best at what they do.

JB:  Talk about your tactics for building trust.

JCF:  Real simple:  it took time.  We got together once a week.  In the beginning (and this was a valuable lesson we learned), once a week on Mondays we would sit down for a 5-hour meeting, and all of us would talk about the things we were in charge of executing.  We would end the meeting talking about what was supposed to be executed the coming week.

JB:  What was great about those meetings?

JCF:  That it was a chance for us to come together first of all.  We were forced to come together on a regular basis so everything that was supposed to be done was checked off.  During those meetings new things would come up so we invested the right amount of time.  We guarded that meeting to make sure that all the things that needed to be talked about for the previous five days were discussed.  At those meetings we learned to talk with each other about what we were successful at executing, and in some cases not successful, and we learned how to challenge each other.  We got a sense for people’s capabilities, what people were good at and what they weren’t, and where we as a team were strong and not strong.  One of the philosophies that came out of there was:  let’s exploit each other’s strengths and let’s forgive and shore up on each other’s weaknesses.  We came to the conclusion that we don’t have to be well rounded.  The team has to be well rounded, but as individuals we don’t have to be perfect.  Typically people like doing what they are good at.  The stuff that people aren’t good at can be done more cheaply/easily and with a lot less aggravation outside of the group.  So that was interesting.

In challenging each other, we learned in those meetings how to laugh, we learned how to argue, we learned how to disagree; all with trust.  The biggest thing I learned about trust was that it made it easier to take risks, because if you trust the group you are with, you think less about the down side or about the rejection that you might feel if you are wrong.  Instead, you will get more excited about the applause you might get if you are right.  So if I could look at trust and pull one thing out of it, it is that it gives you confidence to try things, and if you are wrong that people will appropriately understand that you are wrong and be glad that you tried.  Of course there are boundaries to that but so many times people don’t try enough, they don’t risk enough.

It is amazing, those meetings were good for us because when we walked out of that room every Monday after micromanaging each other for five hours, we then did not have to have any more meetings that week about those issues.  The meetings for the rest of the week were simply subsets of those subjects, and people would pull in whom they needed.  Also, because of the fact that we trusted each other, if I were not invited to a meeting I would not spend anytime distrusting their intentions.  I actually appreciated the fact that I was not invited to some meetings.

JB:  It doesn’t sound to me like you woke up each day thinking ‘how are we going to build trust?’  It was happening at a deeper level as you were working with each other to build your business.

JCF:  It was a behavior pattern.  It was an attitude.

JB:  And you had an accountability mechanism: a weekly practice of holding each other accountable.  That 5-hour conversation was a kind of glue that solidified your confidence that things were going to get done.

JCF:  It was a week-to-week march toward accountability.

The other thing about that meeting was because we were willing to stick together for 5 hours, it saved us so much time during the week.  If we were willing to hang in there the first day of the week, it really saved us a lot of time.  It turned out to be quite an investment.

JCF:  Originally we did it because we were building a company brick by brick.  Even 8 months out, when we turned our first profit, we didn’t abandon that policy because we realized that works under any circumstances if you are going to be accelerating growth.  And to this day, we get together once every two weeks for a five-hour meeting.

This entry was posted in Alignment, Execution, Relationships/Support, Trust. Bookmark the permalink.