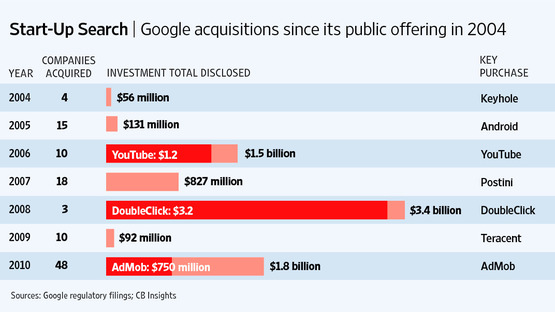 But it’s hard for founding teams not to get excited about Amir Efrati’s piece on Google’s growing thirst for acquisitions in this past weekend’s Wall Street Journal. Efrati notes that Google spent $1.8 billion on 48 startups last year (up from a paltry $92 million on 10 deals in 2009) and quotes Google’s VP of corporate development, David Lawee, as saying the company will “continue to be aggressive.”

If we subtract out the biggest deal (AdMob, worth a reported $750 million), the average disclosed deal size for the other 47 startups Google acquired was about $22 million.  That’s chump change for company like Google, and that kind of transaction is well within reach of many young tech ventures. Given how little it costs these days to launch a technology firm, maybe it’s not so crazy for founding teams to be a bit starry-eyed.

Chump change or not, $22 million is still a lot of money where I come from.

Efrati’s piece on Google resonates with me because it underscores what I heard last week at the Southeast Venture Conference in Atlanta, where the buzz asserted that Google’s acquisitive appetite is just a slice of a much larger trend. Panelists at the conference pointed out how many massive companies have been sitting on cash and are hungry to ramp up M&A activity through this year and beyond: Dell, Facebook, Twitter, Cisco, IBM, Apple, and Microsoft were all named as sitting on war chests and looking to strengthen through acquisition. This trend mirrors the uptick in available funding and deals from VC and private equity firms, angel groups, and commercial lenders.

If being in a position to sell your business someday is one of your startup goals (and that is an important “if” — I want to emphasize here that countless founders have built fulfilling and sustainable lives around businesses that they have no intention of selling), then it makes sense to factor this goal into your earliest startup iterations.  Here’s a quick list of seven early questions to keep in mind:

The list is not meant to be exhaustive or in priority order.  I look forward to your comments — what have I missed?  What do you think needs to be considered up front to raise the likelihood of a successful longer-term exit?

This entry was posted in Math. Bookmark the permalink.

2 Responses to Want to Build a Company That Will Sell Someday? Consider These 7 Questions from the Start