What Would You Do? The Hidden Cost of Hurriedness

(NOTE:  The following is an excerpt from a book chapter I wrote titled “Integrity of Communication.”  It outlines a classic social psychology experiment that sheds light on the question:  Why do we so often avoid taking the most obvious and essential steps to building a solid startup foundation?  I’ve shared this story many times in 2014 while helping a large global company build a more entrepreneurial culture. Many of the leaders I’ve worked with — in this company and others — are haunted and hounded by pressing to-do lists, compressed calendars, and a sense that they are always behind schedule.  While speed/agility are critical to entrepreneurial success, the “hurriedness” that accompanies them can have debilitating consequences). 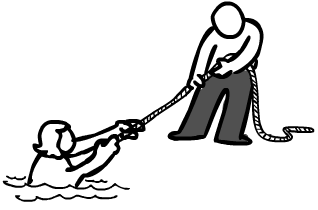 I’m convinced that a major obstacle is the unrelenting urgency and haste—the perceived lack of time—that dominates most startup environments. It can be argued that time is a founder’s most precious resource. Infusing your venture with high-integrity communication requires the use of this resource. Venture changing conversations can’t always be scheduled in advance or put on a convenient agenda, and they don’t lend themselves to hurried shortcuts.

Social psychological research supports the idea that hurriedness is a major culprit in our lack of attention to things we say we value. In a famous study conducted in 1973 at Princeton University, John M. Darley, a professor of social psychology, and doctoral student C. Daniel Batson, researched the phenomenon of “Good Samaritan” behavior. They wanted to know what kinds of personality traits and situational factors influence a person’s likelihood of stopping to help an obviously distressed victim. In the study, they asked seminary students to walk across campus, one at a time, to a building where they would give a presentation. En route, each subject encountered a man (an actor) in obvious need of help, slumped in a doorway, moaning and coughing. The question of interest was: which students would stop to help and why?

Upon analyzing the results, the researchers were surprised to find no relationship between subjects’ personalities and whether or not they would stop to help the victim. Instead, helping behavior was mostly tied to a single variable: the degree to which subjects were in a hurry.

The message of the Good Samaritan study is that our sense of urgency can greatly influence whether our actions match up with our espoused values and priorities. The “hurried” seminary students in the study would claim to be just as altruistic as the other participants, but their sense of urgency clearly diminished their ability to act according to their stated values. Similarly, many entrepreneurs intend to create highly functioning, well-communicating teams, but often cast these good intentions aside amid the time pressures of the startup climate, where an ever-growing list of urgent concerns and to-dos crowds out more fundamental value-creation opportunities.

J.C. Faulkner, when asked about how he established trust and cohesiveness among his high-flying management team, concurs with the idea of no shortcuts. “It’s real simple. It took time” he said. “Trust is not something that you can buy, or that happens quickly. It is an intense thing that has to be developed over time.” The paradoxical good news for D1 was that this investment of time led to terrific speed and growth. “We had a goal to produce forty million dollars of business in a three year period,” J.C. recalls, “and we did it in twelve months. In my wildest dreams, I wouldn’t have thought it would happen, but I learned that an efficient management team that trusts each other can make so many decisions. The question is: how quickly, how effectively can you have conversations to make the best decisions? Some teams are too slow in making decisions, and some are very quick to make bad decisions. But if you are fast and you make the right decisions, it’s explosive.”